Generally I enter “India” in google search bar and select news so as to see what is happening in India. I did the same a couple of days ago, but this time I found something very upsetting and sad. Tons of different news sources were talking about some survey that declared India as the most dangerous country for women. I have quite a big monitor at my work place, and all I could see was this:

I was finding it difficult to digest this survey so I began digging the facts and the base for the survey. I visited the official site for the survey. I saw the ratings. Even before I would go to different factors considered that took India to first place according to the survey, I noticed something strange about the countries on the list. Except for the US and India other countries were/are either war trodden countries or under seize of groups like ISIS or Boko Haram etc.

The very first couple of  questions that came to my mind:

1. Is a war trodden country safe for Men or anybody else for that matter? Let alone a woman. Does it make sense to include them on a list specific to women? Fix the war and the conditions would improve automatically.
2. Can fully functional democracies like India and the US be compared with them?

There are facts, there are surveys and then there is “common sense”.

I actually felt relieved at this point, my sadness vanished and I was pretty sure that this might be either a nicely packaged propaganda or a way to attract viewers to improve their deteriorating business. I went ahead and looked at the methodology used in the survey.

They had asked some 700 representatives from 193 UN nations for their opinions on five different parameters, out of which 580 responded.  It was a perception survey and had nothing to do with the facts. Now, it made more sense. Unfortunately, the so-called news sources did not tell that. The representatives were supposed to give a list of five countries and rate them on a scale of one to five for each parameter. They claimed on their site that the survey is supported by data analysts, statisticians and so on. Even if we assume that all 580 were Indians (which is not the case) and they lived their entire life in India and covered every city, can this number be a genuine representation of 1.35 plus billion people? If it can, then, I (sample size of 1) can comfortably say that 90 members staff of Thomson Reuters Foundation are ignorant to the principles of statistics. So, even a perception survey should have a reasonable number of samples, unless they were in a hurry of making money and getting visitors all around the world.

They are not the only one responsible.

Instead of blaming them shouldn’t we be asking ourselves, how was this kind of perception created in the first place? They did not create the perception. But somebody sure did. I think we are forgetting them: 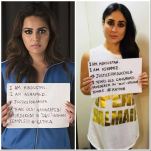 The crime happened, and what is the status now? I think none of these guys tweeted or posted anywhere that they might have actually made a mistake. People like these created the perception. They should be held accountable and not the survey. If people go ahead and wear those kinds of t-shirts at Istanbul Airport, it will be seen by the outside world. The world is not blind, it has access to twitter and facebook as well (if these people are unaware of this). No wonder,  many of the high-end travelers in Europe don’t even consider India as a travel destination. I have met so many Europeans who have Bhutan in their wish-list but not India.

This is typical “Indianism“, fighting with the consequences and forgetting the actions. Indians built this kind of perception. Different people who participated in this had their individual motives. Some wanted screen time, some wanted to get popularity, some wanted something else. The survey clearly mentioned that the social media movement #metoo had an impact on the perception of the USA. I don’t know what actually is happening in the US, who is doing what, but I can certainly say that most of the media houses are against Donald Trump and in the process ending up denigrating their nation. In India it is also quite similar, the opposition parties have no sensible plan and issues to attack the ruling government and so they make up issues like #justiceforasifa. Please have a look at the article by me a few weeks ago “Misconstrued Opposition“.

The sample size is not the only problem with the survey, going further in the methodology I found some of the parameters they included were helping their narrative but not the actual women issues. They included parameters like Healthcare as in the availability and accessibility of healthcare facility, Discrimination as in the access to economic resources. These are gender neutral issues and are due to poverty and not because they are specifically directed towards women. I don’t think a rich (not poor) person, irrespective of the gender would have those problems. Including these parameters actually divert people from the core issues, simply because these issues bring different issues with them.

Culture and Tradition is a parameter  in the survey which actually affects women. But the survey did not provide any kind of details as to which traditions affected India’s rating? They should have given the exact culture/tradition because of which women are suppressed, if they wanted to make any kind of change which they claim they want to. India has a variety of religions, traditions and cultures; all are not bad and if such a parameter is included it is more than important not to generalize but mention specifics. Genital Mutilation & stoning are specific to a particular community, which community, the survey did not mention. Why? Were they afraid of somebody?  Is lack of a uniform civil code affecting this parameter for India? Also, the survey mentioned acid attack in this parameter. Seriously? Shouldn’t it be a part of non-sexual violence parameter?

Two parameters  that largely affect women are Sexual Violence and Human Trafficking. Since the sexual violence is mentioned in the survey I would like to bring in some actual facts. According to statistics per 100,000 inhabitants, the number of women raped is 1.8, which is way less than any other country you would think of. Some highlights from the stats (per 100,000) : Sweden-63, Australia-28.6, USA-27.3 and so on.  By no means, I imply that we don’t have to work on this anymore. There are many changes we have to bring but India is definitely not even close to being the most dangerous for women.

Even though there are a countless number of laws protecting women rights, still rights are violated. Why? Shouldn’t there be surveys like the number of women filed complains, how many of them were genuine, how many of them got justice and in how much time? Time frame is very important, it is not a hobby that should be pursued for years. Long trials keep the wounds alive and do not let victims live their life.

The very first step towards fixing any problem is to identify, accept and acknowledge the problem. How would you feel if you visit a doctor and he starts treating your pain without even asking where exactly do you feel the pain?  I don’t see anybody protesting for improvement in the judicial system in India. There are more than  133,000 rape cases pending. This is the core issue for crimes not being controlled. Fixing the root cause which is “delayed justice” will automatically eliminate the need for themes like “Ma ruhlz  ma life” , “don’t tell me what to wear”. They are useless reasons to fight, you have been doing this for years and even if you continue doing this for the next century nothing is going to change.

Further, by singling out cases like #justiceforasifa or any other case for that matter, the feminists today at least in India are loosing their credibility. People have stopped supporting them because they don’t know what is going at the backstage. It clearly looks that they are acting at somebodies behest.  I have never seen twitter trending hashtags and feminists or any other activist groups organizing large-scale protests for sex workers in India. Organized Prostitution is illegal in India, but still, everybody knows it is there, there exact places. Why?  Shouldn’t the workers and their kids be treated well? aren’t they women? Can legalizing it reduce human trafficking and HIV/AIDS. But since they do not form a large vote bank, their issues do not qualify for protests.

Every system has its flaws, so does our judicial system. The issues have been swept under the rug for quite long. Please have a look at one of my articles here. Democratic rights could be used to fix them, protests are not only to bring the nation down, get the reservation, ban or release movies. Please have a look at the article by me on the impact of current protests here. They can actually be helpful in fixing some issues which remain unfixed because of India’s Politics.

We cannot simply run away from these issues, because they are not just women issues, they affect the entire family and the entire society. You cannot expect a civilized society without educated and free women. Look around the world, the cultures, the societies which suppress women get messed up real big. If a mother is unhealthy, the baby will never be healthy. If she is uneducated, has not developed a thinking ability, sending the kid to whichever high school or university would be useless. He would turn up into what we call “padha likha jahil” (an educated illiterate). Kids are the future, their thoughts and actions would define the future. The ones who are not nurtured properly, generally grow up to become full-time criminals.

5 thoughts on “Whose fault is Thomson Reuters Foundation’s survey?”