Which among the two (A.  Indian National Congress or B. Bhartiya Janta Party) can solve the Kashmir problem?

Like it or not, you are going to answer this question in less than six months. If you vote you choose the answer consciously, if you don’t vote or use NOTA, you choose. But you choose unconsciously! but there is no option to quit.

What if, you were to answer this question today? What will your answer be? How will  you reach the conclusion?

Note: The intention of this post is not to create an opinion or perception about any person or party but to find some answers. Many readers might find the blog biased so they could skip reading it, however, please do search about Special Operations Group, Renegades or Ikhwaen and Jammu Kashmir Liberation Front.

So far we don’t have  a machine that can take us to the future and help us see what happens next, but we do have a way to read the past. We can at least find out, who among the two cannot and will not fix the problem; in short use the rule of Disjunction Elimination.

Kashmir does not have a single problem but instead has several problem threads running in parallel. This makes it extremely difficult to even find a starting point let alone reach the conclusion. Last week I got a hint for where to start from.  I came across a news item that perturbed me a bit more than other disturbing news items that I come across these days: 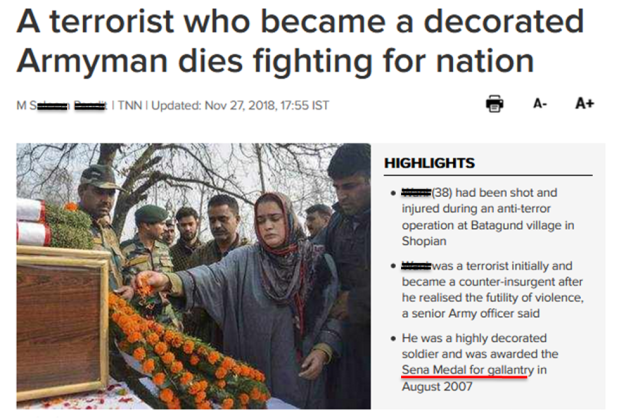 I struck the names out because they aren’t important (what is in the name anyways?). I had only one question while I read the complete piece and some other news articles talking the same thing from different sources:

” How was a terrorist even eligible to join Army? let alone receive an Award”

Pretty soon my internet search got me my first clue; “Ikhwan”. Turns out that Ikhwan was/is a counter insurgent group raised in 1994 (remember the year) and had Special Operations Group’s support[8]. They were ex-militants who were sidelined by some external powers (guess who).  The reports say, this helped in reducing militancy in the state. Indeed it did. They legalized a small section of militants, of course the number of incidents would reduce. Several questions pop up in my mind when I was getting acquainted with this setup that actually resembled like a Hollywood movie Sicario-2’s plot where the US authorities initiate a gang war in between two drug cartels; the only difference being that they did it in some other country and in our case some smart people did it on our own soil. Perhaps they did not consider that piece of land as their’s. Coming back to the questions, first, how was the government planning to deal with the Ikhwaen once the state was able to get rid of other militants? Or was the government hoping that the militancy would never end?

Second, did Indian Security forces and especially Indian Army earned a bad or rather a very bad reputation because of the crimes committed by a group who was not even a part of Indian Army? Indian Army and Indian Security Forces have been time and again blamed of human rights violations, how did human rights watch decide if it was the army or Ikhwaen[6]? I am pretty sure nobody would have dared to ask for ID cards to verify if the person who was committing the crime was Indian Army or some group pretending Indian Army. Indian Army is not just an army with power, but it is an army with morality. It would not commit the crimes that were pinned on it.

“Every militant killed earns the SOG Rs 35,000 to Rs 50,000, according to a police officer.  Then there are the out-of-turn promotions. Hundreds of officers have risen up the ranks while hundreds have policemen have become officers in a matter of a few years, thanks to their stints in the SOG.[9]”

So far so good, it may have been a strategy to counter militancy with a monumental collateral damage. In 1996 the government took a U-turn, it stripped Ikhwaen of all the official powers, although a lot of its member had already been and continued to be absorbed by the Special Operations Group or contested elections and joined state politics. The big question that arise now is what happened to the rest of the members? They were trained and made even more lethal. Where did they go? How were they earning their bread and butter? Were they responsible for the increase in the number of militancy related incidents? Moreover, in their two year stint they had unleashed hell in the state. What would have happened when their powers were taken away? Would the number of revenge crimes increase in such a scenario? Who was responsible for those and what were those crimes called? Militancy?

Moving on, in 2002-03 Jammu and Kashmir Peoples Democratic Party wanted to disband Special Operations Group, however, Congress was not so keen, forcing Mufti Mohammad Sayeed to mellow his tone. In fact the coalition ended up doing the worst, assimilate SOG into the state police[1]. Maybe this is when they became an inseparable part of the Indian Armed Forces. Gallantry awards are not the only award they received, some of them also received Padma Shri[6]. Is this the reason why there was an award-wapsi-gang (the people who returned their awards to prove something like their loyalties to the ones who awarded them, as they knew they did not deserve the awards)? Further, is this the reason an army personal was not listed in the national register for citizens in Assam last month? I am not saying this is the reason, I am only saying that the probability of this happening is definitely greater than 0 if is not 1.

A critical aspect of this story is still missing. Alleged blatant rigging of 1987 elections in J&K, is considered a major reason for the rise in the militancy in the state. You could easily google the parties involved. The years following was the time when ethnic cleansing in  Kashmir was carried out. Jammu Kashmir Liberation Front along with some others were held accountable for the crimes committed[7]. Now the interesting part, in the year 1994, JKLF disbanded its militant wing and adopted a “secular” stand. Does 1994 ring a bell? It was the exact same year when the elite-counter insurgency unit was formed including the ex-militants who had apparently had a change of heart (good T and bad T). Is it possible that the people who carried of Kashmiri Pandit Exodus not only receive regular salaries and pensions but also awards?  According to a 2003 report by The Hindu, nearly 350 to 500 members of Ikhwan remained on active duty with the Jammu and Kashmir Police and the Indian Army and were paid a regular stipend[3]. Appeasement politics at its very best!!!

It is true that Kashmir had problems because of partition, but the problems had clear open ends. If only the decision makers had thought it as their own, they would not have messed it up this bad. After ’90s the open ends are not there anymore, there is a web, a web of lies, a web of poor and selfish decisions. The irony of situation is that the people who spun this web are now showing their stinky teeth,  giggling at PM. Modi and his party for being able to just quarantine and not untangle the web completely in his one term.

“BJP/RSS were almost non-existent in the valley and Hindus were forcefully thrown out, who else was left to put the blame on? Indian Army, it was!!!”

No matter which thread I follow, I always end up finding the same entity spinning the web at the far end. Now you could decide which among the two (A.  Indian National Congress or B. Bhartiya Janta Party) cannot solve the Kashmir problem?

Also read: #PulwamaAttack 40 CRPF Martyrs: They make sacrifices for ‘pathetic, losers with no self respect’.

Who let the “Pigs” in!!! (Insurgency in Kashmir)

13 thoughts on “Entangled Kashmir: A web of poor and selfish decisions”