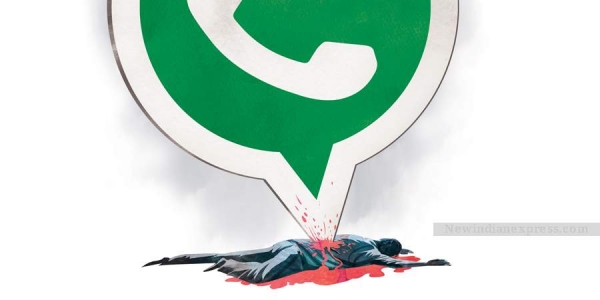 If only Isaac Newton was a pseudo-secular-neo-intellectual-liberal or a modern day journalist, he would have prosecuted the apple and the tree from where it fell on to him for attacking him and his freedom. The apple did fall, it fell from the tree, it is a fact, a true event, the ultimate truth. What is Gravitational Force? What does it have to do with the apple falling on him? Can anybody see it? hear it? or touch it? No!!!  Thank god, Newton was neither a pseudo-secular-neo-intellectual-liberal nor a modern day journalist. If he were one, perhaps Apples would have been considered devil’s instruments, because where ever you go, the apples (if they fall) will fall on whoever sits under the tree. Only the person who sits under a tree is different but all other conditions (tree, apple, atmosphere and earth) are constants.

Likewise are the lynchings; lynchings in the name of cow. Only the faces are different; a larger group of people killing one or maybe more than one person. Cow is a constant and now  whatsapp is also a constant. These are some truths, facts. We can see a mob, a person being lynched, a cow and whatsapp messages.  But what is the force which is making them commit this crime? Or do you think, Indians are that stupid, and will kill a complete stranger just because they read a message on whatsapp? I beg to differ.

Survival Instinct! The human instinct to survive is the most powerful drive or force.

Cow is a source of living for a lot of people in India; they sell cow’s milk and milk products. What should a person, who survives only because his cow is alive and healthy do when she is taken away from him?

How do you earn your living? What if somebody takes your source of income? What will you do? How will you survive in this world?

A logical reflex argument one could make is “a formal complaint with the police should be filed, no one should take law in his/her hands; we all are civilized and law abiding citizens. Aren’t we?”  Indeed we are. But there are two small problems with the argument. First, Is police even accessible to all the places we are talking about? Even after 70 years of Independence villages are not connected by roads, they do not have electricity connections. If the two most important and basic things are missing, the access to police looks flimsy.

Second and more important, if there is police and is accessible why is cow smuggling still happening? You might not have heard much about cow smuggling because journalists today like to play with words. Whenever smuggling is mentioned, terms like “cattle” and “bovine cattle” are used. However, when lynching is mentioned, terms like “cow” and “beef” are used. It could be a mere co-incidence or a deliberate endeavor to  hide something or to build some narrative. You could decide.

Cattle smuggling between India and Bangladesh is estimated to be around $500 Million business. The smuggling business has evolved into a criminal enterprise. On a daily basis 20,000 to 25,000 (i.e. more than 5 million annually) cattle heads are smuggled out of India. 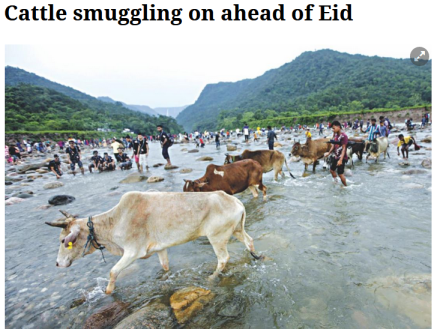 The thing is, these  cows and calves don’t have wings, they don’t fly; somebody walks them across the border as shown on the right and only a small fraction is ferried in trucks.

Who do these cows and calves belong to? They are not apples falling from a

tree; they belong to someone. They were stolen. During all this, not only some lost their livelihood but also countless number of border security personnel lost their lives.

For a person who earns his living with the help of a cow, a dead cow is as good as him being dead.

The chaotic situation that we have been witnessing after 2014 is because the government for the first time is doing the right thing. They are not turning a blind eye to the illegal activities which had become a norm in last 70 years. BSF claims that deployment of more force, inducting modern gadgets have helped them drastically reduce smuggling.

How did Hinduism come in all this? As far as Hinduism is concerned, not only cow but every living being, from a tiny mouse to a mighty elephant from a crawling snake to a flying eagle has its own place. The dog (Shvan) is also the vahana or mount of the Hindu god Bhairava. Indra’s vehicle is a white, elephant known as Airavath, which according to the Puranas emerged during the churning of the oceans by gods and demons. It was given to Indra as a gift. Ganesha, the lord of the Shiva ganas, has the head of an elephant. Hindus worship Hayagriva, an incarnation of Vishnu who has the head of a horse and who played an important role in saving the Vedas during a conflict with the demons.  Lord Shiva is known as Vrishabhanath, lord of the bulls. His vehicle is Nandi, the divine bull, also known as Basava, who is worshiped by devotees individually as a personal god and in association with Shiva as his vehicle.The tiger is the most popular and well-known vehicle of Shakti and her numerous manifestations. Serpents, snakes, rats, lions, cats and the list goes on. In short, as per hinduism you look at every life form as worthy of life as yourself. Just because human race evolved to posses an extra thumb in each hand and a few extra ounces of brain, they did not win a right to own or kill other life forms.

Congress along with its promoters and supporters have consciously molded this issue as per their convenience. These incidents did not come into existence after 2014, they were right there but were never highlighted. Why? I think if these issues were raised under UPA regime, they would have been considered law and order issues (which I think is true) and would have portrayed UPA in a bad light.  Showing these incidents in the shadow of cow vigilantism now helps their cause. But why shoot the messenger? Why target Whatsapp? Whatsapp came into existence much later, these lynchings along with the lynchings in the name of child lifters have been there way before it. You could research by yourself how big is the human trafficking business in India or wait for my next blog on this. Think! Think, who benefits the most if whatsapp is discredited?

Why are they trying to lynch whatsapp; in the name of Holy Cows?

6 thoughts on “Lynching Whatsapp; In the name of Holy Cow”