After witnessing what is happening in Maharashtra and what happened in Karnataka an old story struck me.

There is a very old story about a hunter and his clever tactics, you must have read it as kids story or seen it in the movies or cartoons. The story goes something like this:

Once upon a time, there was a kingdom with several villages. Over the period of time there came a family of  man-eater beasts and started haunting the villagers. The  villagers with their limited capabilities and not so good weapons couldn’t do much. After some time, they hired a really clever hunter to get rid of the beasts. The hunter studied the beasts, created a plan and assured the villagers that it will be they who’ll kill the beast and not him. He would just show them the way. The scared villagers agreed.

The next day, the hunter took a lamb and tied it out in the open and asked all the villagers to just focus on the lamb from a distance and not visible to the beast or the lamb, wait and do nothing. The villagers did as asked. The beast smelled the lamb and came running towards it, didn’t stop to think, didn’t see left or right, straight to the lamb, pounded over it, ate it. And then realized what had happened. The villagers too many in numbers were able to kill the beast with their not so good weapons.

The hunter moved to a different village. A similar situation occurred. When one of the remaining beasts from the family saw a lamb roaming out in the open, he instantly remembered as to what had happened the last time with one of his family members. This time he was aware of the hunter’s trick. He did not make a move. But then something unusual was happening this time. The lamb was not tied, it started moving towards the beast as if it was thinking that the beast is scared of the lamb. The beast got confused but still did not make a move. He waited and waited and waited; the lamb kept on inching towards the beast in his full swag, as if he was immortal. At some point in time the beast gave in to his temptations. He simply couldn’t resist the smell of the flesh, he thought the lamb is not tied, last time it was tied, maybe this time he is actually lucky. He pounded on the lamb, ate him and then the villagers attacked and killed the beast. The hunter had tweaked his strategy this time, let the lamb walk towards the beast and confused both the lamb and the beast.

Can you make a guess as to who is playing (or played) the role of the hunter, the beast and the lamb?

If we talk about this year’s general elections that were held in May, 2019, there was something clear even a year before the election process began: “BJP would come out to be the largest party, but might miss the majority mark on its own.” The question of paramount importance was- “Will BJP be able to manage 272 on its own?” Regional coalitions, the mahagathbandhan was the biggest challenge for BJP. Different parties forgot their sole reasons of being in politics and just started working towards defeating BJP. How did BJP overcome this challenge?

JDS had contested elections against INC. But still INC went running to JDS and cobbled up an alliance, without thinking of the consequences. Instances like the crying Chief Minister, Mr. Kumaraswami, him claiming that he was there because of madam g and not because of the people or later complaining that the government was not able to function because Congress is not letting them work were the living reminders to the entire nation that a post poll, opportunistic, alliance is not in the best interest of the country. BJP had successfully exposed the dirty coalition politics like never before. The voters did not want another corrupt coalition like UPA, they were not choosing one party over another  but they were choosing a stable government over a shitty corrupt coaltiong (gath-jodh) government.  You could search for other zillion examples that made a lot of people cringe. I do not intend to lengthen the already long article by quoting all the instances.

We don’t live in 50’s or 60’s any more. The number of political parties, contestants and spending capabilities have exponentially increased over the decades. Which is why, 303 seats by a single party in today’s India is a commendable feat by any standards. In this age of fast internet and availability of quick facts (law/constitution) and figures, the other abstract aspects like emotions, human psychology, perception, image, etc are increasingly getting ignored during our political discussions and analysis. The so called number game had over simplified the politics in India in the last few decades. And now, if some one can’t prove his/her analysis or strategy using an understandable mathematical model, either his/her understanding of politics is not as it should be or his/her strategy is destined to be doomed.

The exact same story is repeating now in Maharashtra, of course with a slight improvisation.

Congress was quiet after the election results in Maharashtra, there were no movements from their end. They knew this very situation from the past and I am sure their political analysts would have known it too. But this time Shiva Sena walked towards them from the front door. After a certain time they gave in to their hunger of power. And they will see the exact same fate. How?

Congress would have never supported Shiv Sena. Not only support, they are now shouting at the top of their voice “we support Shiv Sena”. They are filing court petitions as co-petitioners with SS in the Supreme Court. They are fighting for it. By the time floor test happens, they would have vowed their allegiance with Shiv Sena at least a million times, “we support shiv sena”, “Shiv Sena and Indian National Congress are one and the same“.

I am pretty sure BJP is going to fail the floor test again as in Karnataka. An SS-NCP-INC coalition government in Maharashatra would be a constant reminder to millions that Congress is all in for power. Secularism, Intellectualism, Liberalism etc. etc are just some means to achieve power; use the most suitable quality to remain in power.

Its not about ideology as a lot of people are saying these days, look at seven state elections due in less than 16 months, and the potential issues that would be making headlines every single day; thanks to the media.

Shiv Sena has been demanding Uniform Civil Code for years now. What happens when BJP starts pushing this in the parliament and in public?  Same goes with NRC. Just a week ago, Mr. Amit Shah announced the government’s plan to extend NRC to all the states in India. Where will Congress stand? Where will Shiv Sena stand? Shiv Sena has a PhD in NRC, forget the non-citizens they don’t even tolerate people from other states. How will they stay quiet on this? Either of the two parties will have to let go of their stands or at the bare minimum stay quiet when these issues come up. And I don’t think Shiv Sena is the quiet types. In less than 16 months, Assam, West Bengal and Kerala go for elections. Who are the Muslims going to vote? Will they vote a party who is in coalition with the party who lead from the front to demolish Babri Masjid?

Whatever would happen in any part of India, INC-SS-NCP would be counting their MLAs on a weekly basis, stuffing them in the buses and holding them hostages in some four walls without any communication, exactly like they did for MLAs in Karnataka. Don’t you think rest of the states would notice this and despise it?

Bihar goes for election in 2020. Nitish Kumar, after looking at what happened with SS, a three decade old ally of BJP, would not even think of arm-twisting in the name of a coalition government. SS asking for 50% ministry and a rotation CM was a clear arm-twisting in the name of coalition. I am sure, JDU would be reasonable with their demands now. Moreover, if I remember correctly, beef was a big issue in last assembly elections in Bihar. I don’t think Beef and Cows would even be an issue this time, let alone a trending issue. And if they do become an issue, floor test would happen in Maharashtra; a revenue generating state.

Shiv Sena is the father of far right politics, the party invented many of the tactics. If you compare BJP and Shiv Sena on a left-right scale, BJP would look left and I don’t know what the professional leftists would have to do to fight that. Interesting!!!

In the other three states going for elections Delhi, Puducherry and Tamil Nadu, BJP has nothing to lose, it can only gain in these states. And as soon as these elections are done, BJP would show SS-INC-NCP in Maharashtra the places they deserve as it did to INC-JDS in Karnataka. The first thing BJP did after 2019 LS election was form its own government in Karnataka.

This political stunt pulled off by BJP will force Congress to cut of their last leg (their vote bank). Ever since India’s independence, Congress had been winning the elections in the name of freedom struggle,  the name Gandhi and its Muslim/Dalit vote bank. Freedom struggle is too old for today’s youth to relate to, and moreover, people know see that Congress was not the only party involved in the freedom struggle, there were others too. The name Gandhi has already lost its sheen by now; Rahul Gandhi and Sonia Gandhi are shinning examples of that. Congress had worked really hard to keep its vote banks intact. And now, that’s at stake. We are inching towards a Congress Mukt Bharat faster than ever.

Edit:- I did not write it after Devendra Fadnavis resigned. I wrote it on the weekend and published it on Monday, the night before he resigned (although, I did expect them to drag this game of politics till the very end, they stopped playing earlier than expected). Have a look at the time and data on the tweet I made (I live in a different time zone so you might see a time difference): 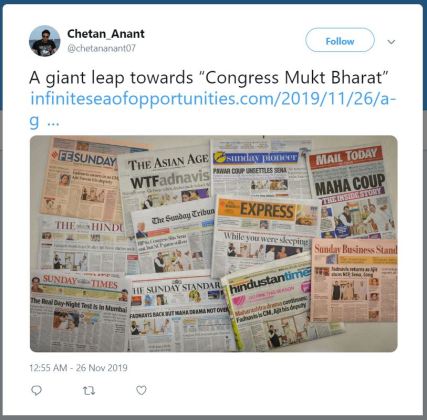