“Everybody was so focused on magician’s right hand, that no one noticed him slipping the coin in his pocket with his left hand. He did it right in front of our eyes and in broad day light, but still we had no clue how the coin disappeared and reached his left pocket.”

This exactly is the case with black money and politicians. Whenever we start talking about black money, Swiss Banks are almost immediately brought into the conversation. Recently, a news was aired in mainstream media that the money parked by Indians in Swiss Banks increased by 50% to INR 7000 Crores. However, no body knows how much of that money is black? For instance a person like me who lives and works in Germany  gets his salary credited in a German bank and so are the savings, in the same bank, however, one of my friends from the university lives and works in Zurich, Switzerland. His salary and savings are in a Swiss bank. Now, in those 7000 Crores did they include his savings and salary? Is he the only Indian Engineer or to say Indian working there? No! There are thousands like him. Moreover, there are Indians who have their big or small businesses in the country. Was their money included in those 7000 crores? Yes, it was and the interim Finance Minister Mr. Piyush Goel tried to explain the very same thing.

In fact if you look at the stats, India stands at the 73rd position in terms of money parked in Swiss Banks by Indian Citizens. The total money parked by Indians there is only CHF 1 Billion i.e. 0.07% of the total money parked in Swiss Banks. The UK stands at the first place with  CHF 403 billion i.e. 27% of the total money parked. The USA comes next at the second place with CHF 166 billion. Germany also manages a place in the top ten. Do you think all these countries are corrupt and their citizens are parking their black money in Swiss Banks? I don’t think so. Even when we compare BRICS, India comes last. China at 20th place (CHF 160 billion), Russia at 23rd (CHF 135 billion), Brazil 61st (CHF 1.9 billion) and South Africa 67th (CHF 1.5 billion). All the money in Swiss banks is not black money, in fact only a very small fraction of Indian black money is there. As you continue reading further, you would know where most of the black money is.

Never the less, Automatic Exchange of Information (AEOI) has now been  implemented between Indian and Switzerland. The two countries signed a joined declaration on Nov 22, 2016. At least now each and every conversation about Black Money would not end with Swiss Banks. With this process in place the following pieces of information would be shared regularly(source):

Do our political parties (both INC and BJP) know where the black money is? Did our government current or the previous had any clue about it what so ever?

Yes, they knew exactly where the money was. But they did not think it was important for us to know that.

Three financial institutes, Delhi-based National Institute of Public Finance and Policy (NIPFP),  the National Council of Applied Economic Research (NCAER), and the National Institute of Financial Management (NIFM) in Faridabad conducted a research and concluded that proportion of total black money lying within India is much higher than outside the country. Up to 97 per cent of the total black money lies within India

Did Congress know about this? Yes, it did!! Because the research was commissioned in 2009-10 and the report was submitted in 2013 when UPA was in power. The coalition government dominated by INC did what they do best, bury the report. The report did not see the public domain. They chickened out when the time came to take a strict decision. And when in opposition, they mocked the Modi government when it took the steps that should have been taken earlier like demonetization. The people who still support INC should at least ask them why the report was not made available to the public?

Not only did they mock, they mislead the nation by spreading incomplete information. For example, they claimed that 99.3% of the total currency (₹15,417.93 lakh crore) was returned leaving merely 0.7% undisclosed. First, this .7% comes out to be INR 16000 crore. Even if we consider all the money in Swiss money as black i.e. INR 7000 Crore. This even by opposition’s claim means Demonetization killed black money of worth more than  twice of what is deposited in Swiss Banks.  Second and more importantly who said the total currency in circulation was ₹15,417.93 lakh crore? This could have been the currency printed by the official mints, but this could not be the actual value of currency in circulation. Simply because the Reserve Bank of India has no way to determine the exact amount of fake bills in circulation, they have already accepted this. They can only detect the ones that reach the bank. For example back in 2010, the bank detected fake currency worth INR 3200 Crores, and that would just be a small fraction of the actual number of fake currency in circulation, as not all bills reach the bank. There can only be approximations.

uestion, except every time they would say that some of the bills were in transit. However, even if the data for consecutive years was taken, the numbers did not add up (source). Between 2000 and 2010-11 RBI received approximately 339 million notes more than what were actually printed.   RBI along with the UPA government(s)1&2 kept a lid on this fake currency issue. And now for a change, when somebody, did do something in this regard, highly educated people like Mr. Raghuram Rajan have something to complain about. Where was his voice when the mess was being created? Was he not allowed to speak then? Or was he involved in all these scams?

This is not all, there were instances where different currency bills with the exact same number were spotted in the RBI treasury chest during the CBI raids. How did fake currency ended up there? What did the authorities do in order to fix the problem? Other then lip service of course.

The thing is, neither you, nor me or nor anyone else knows for sure as to how much currency was in circulation in India before Demonetization. Can you think of ways where you or any government would know for sure as to how much fake currency is in circulation? If you know, please let me know through your comments. I would be grateful. But with all these pieces of information readily available on internet in the form of various reports, it could easily be said that currency in circulation was way-way more than ₹15,417.93 lakh crores.

To tackle black money, demonetization was a mandatory step but not the only step. It was coupled with the steps like Benami Transactions (Prohibition) Act, or the Pradhan Mantri Garib Kalyan Yojana or Income declaration scheme (which was mocked as Modi’s fair and lovely scheme by Mr. Rahul Gandhi) etc. etc. Have a look at the table which shows the amount collected by the government with the help of these schemes. 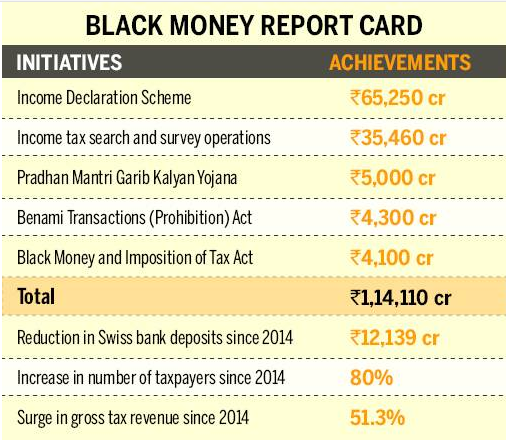 Moreover, the number of tax payers in India increased by almost 80% from 2013-14 to 2016-17. In 2013-14, there were only 3.79 crore taxpayers in India, which increased to 4.07 crore in 2015-16 and 6.84 crore in 2017-18. A clear cut increase of more than 3 crore tax payers in first three years. Now, either it is that the government generated 3 crore new jobs in first three years that people were able to pay taxes or those people by not paying taxes were generating black money for all the previous years. You could choose to believe either of the options. If you have any third reason as to how the number of tax payers increased, please do mention in the comments. If Modi government had killed millions of jobs as claimed by the opposition, the number of tax payers should have reduced and not increased. Do you agree? Unemployed don’t pay taxes, do they?

These are not the only actions undertaken by the Modi government. Modi government has tried to cut the source of black money in the first place. “Prevention is better than cure.” Had the right measures be taken at the right time,  black money would not be such a big problem today. The previous governments let it happen. They could have nipped it right in the bud.

Back in 2013, the Delhi High Court claimed that 99% of NGOs are fraud and money making devices. The Modi government has shut down more than 10,000 fraud NGOs in its tenure. Approximately 20,000 FCRA licenses were cancelled and 13,000 licenses were not renewed.

On one side is the Modi government, that has tried to kill the source of Black money and on the other side is the Indian National Congress, which not only turned a blind eye towards black money but also created ways to generate more black money. For example CSR (corporate social responsibility) which came into existence by the companies act, 2013. It is a mandatory 2% contribution from some of the companies towards social issues and India is the only country in this world to have this mandatory condition. How did it or will it promote black money? Some of the companies donate their 2% to charitable trusts, who return the money back to the owners in different forms from the back door after deducting their commissions. And you could guess who are the people controlling charitable trusts. In short this extra 2% tax or extortion gives a reason for the Corporates to look for “different” ways to avoid this. So much for the ease of doing business.

Modi government since its first day behaved as an extremely responsible and professional government. The government worked with a blue print to kill black money. For the first two years, the government opened Jan Dhan accounts for free. The PM himself called for people to declared their undisclosed income several times, he launched several other schemes as well. They had the Benami transaction act, Black Money (Undisclosed Foreign Income and Assets) and Imposition of Tax Act, 2015 already in place. And only then did they hit black money hoarders witDemonetization. Demonetization was not a whim of one person, it was perfectly planned move. When on November 8, 2016 at 20:00 hrs, PM Modi announced demonetization, people with black money knew they were screwed. Unlike Congress, BJP did not leave a clever loop hole in the design so that somebody could exploit that. All the doors were shut at the same time and this is the biggest reason they cried foul. The loud noise we saw after demonetization was the corrupt crying. Corrupt people/politicians/parties don’t carry a mark on their head. They look like everyone else.

The only sad part is that PM Modi had not started his #MainBhiChaowkidar campaign till then, if he would have done so, a lot of people would have refused to help a certain few in getting their currencies converted. This is the reason why we all need to do our parts, and cannot just wait for Modi to wield a magic wand and wipe all the problems off.

If you liked this article, please do read The Cash Nexus: Criminals and Politics