November 4, 2019November 11, 2019
“2G, 3G, CWG, coalG, madamG” as soon as I uttered these words, my friend (the same for whom I wrote He turned from being a die hard Modi fan to a Modi hater!!!) turned around, looked at me for a second and asked “Do you think 2G spectrum allocation was a scam?”
Of course it was and everybody knows it.
How? He asked, settling down on the couch. I could sense some sort of confidence from his body language, as if he knew what I was about to say and how I would not be able to prove my point.
Nevertheless, I started with whatever I knew. The government gave away the licenses at throwaway prices; 85 out of the 122 licenses awarded were illegal. The recipients did not fulfill the necessary requirements. The process was not transparent. And some more…
Again with the same type of confidence he said “and how does it affect the common man of India?” He continued, if the government would have followed the exact rules and regulations mentioned in book, had awarded the licenses to a limited number of companies, with heavy fees, would it not have affected the price of the service we common people used? Would the service cost not go up when the companies had paid hefty amount for the licenses and had only a few competitors in the market?
Awkward silence in the room.
I had no rebuttal to this. It made sense to me. May be the way government awarded licenses was unfair, some deserving company might have been left behind but the people of India did enjoy affordable services. How can this be called a scam? Can a scam be good for the people?
Moreover, Congress came up with a Zero Loss theory according to which there was no loss incurred to the government. In 2017 the court also acquitted A. Raja and all his buddies, re-enforcing the fact that there was no scam. Was it just a political gimmick, highlighted by BJP for its own electoral benefits?  I had tried to dig up more information about the scam but every time I would only find the same things;  be it government not following the procedure or missing transparency or crony capitalism or favoritism. But nowhere I could find how it affected the common man like me, ………until this month.
My favorite politician, who just returned from Bangkok and will be traveling to Indonesia soon, as if it was his transit stay in India, dropped a harmless looking tweet: 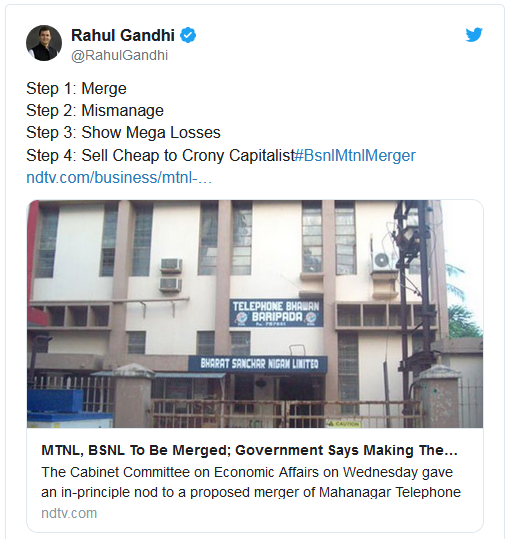 7 thoughts on “Is BSNL Crisis a product of 2G Scam?”