PM Modi on March 27, 2019 addressed the nation and spoke about the successful Anti-Satellite Weapons (ASAT) test. I heard what he said, word by word, but did not understand the significance of his speech.

I was getting exactly the same feeling that I got when he announced demonetization on Nov 8, 2016. It took me a lot of time and research to understand the impact of demonetization. You could have a look at one of my articles: Modi gov’s surgical strike(s) on Black Money, you won’t be disappointed.

It took me quite a few days and a lot of reading again to get a clue of what the geo-political implications of his 10 minute address would be.

So coming back to ASAT, what is hiding behind the Anti Satellite Weapons (ASAT) test?

ASATs are designed to incapacitate or destroy satellites for strategic military purpose. Although, their role look different to a BMD or Ballistic Missile Defense, which is a system involved in the detection, tracking, interception, and destruction of attacking missiles. Originally conceived as a defense against nuclear-armed intercontinental ballistic missiles (ICBMs).  But both these systems have major technological overlaps. A deployed Anti-Ballistic-Missile (ABM) system could be made to behave like an ASAT system. This is a well documented fact. A book titled “Arms Control in Space: Workshop proceeding” which basically documents the proceedings of a workshop held on Jan 30-31, 1984. The book mentions a lot of scenarios where ABM and ASAT technologies overlap. For example, in case of a mid-course BMD, the trajectory of missile re-entry vehicle while outside the atmosphere is similar to a satellite orbit i.e. a clear overlap between ASAT and mid-course BMD systems. In fact as real life examples, Soviet Galosh ABM system was not designed as an ASAT but did have capability for satellites in orbits similar to Inter Continental Ballistic Missile (ICBM) trajectories. Not only Soviets did this, the US miniature Homing vehicle ASAT evolved from a design that was intended for midcourse BMD.

ABM systems have treaties in place, there are strict rules that must be followed, however, the ASAT systems don’t have as many rules and treaties.

If we look at India’s ASAT system in consideration, it could also be said that it is something of this sort. The radar, the data and communication links of the DRDO-designed ballistic missile defense (BMD) system were deployed across a wide ground span which effectively tracked the entire satellite interception by the ASAT missile. However, the missile used in ASAT test was explicitly designed by a team of around 150 scientists over the period of two years i.e. after the test was officially given a go ahead in 2016. (Yes, this was not an election gimmick done by BJP government as claimed by many, the government gave its go ahead in 2016 and not in 2019 just before the elections.)

In addition to this, Dr. Avinash Chander, former Chief of the Defence Research and Development Organisation (DRDO) said that no formal ASAT programme had been taken up earlier. He also mentioned that existing booster and kill vehicle of the BMD program has been adapted for the ASAT missile.

India’s ASAT test validates India’s successful BMD system. The greater significance of ASAT lies in technological spin off for phase II of BMD where DRDO seeks to intercept longer range missiles at higher altitude. ASAT has its uses and importance, but it is a deployed BMD which has far more significant and deeper consequences. It changes the complete narrative or discourse for some countries in Asia.

Now coming to the interesting part.

A journal published by Ashton B. Carter “The Relationship of ASAT and BMD” quotes a very interesting but hypothetical scenario. He says–

“The United States deploys an ASAT system consisting of fifty land based missiles carrying infrared homing vehicles. The Soviets worry that these fifty interceptors can be used against missile warheads along with the satellites. Fifty warheads is a small fraction of a  Soviet arsenal of thousands, however, the US, in case of a nuclear war, could defend a handful of targets (with strategic importance) selected by the Soviets — for example a few airfields capable of servicing US command posts and bombers, a ground command post, etc. This would be substantial annoyance for Soviet planners, since they would have to use not one but several warheads for each selected target so as to be confident of destroying  the target.”

How does this scenario relate to us?

You might have guessed it correctly but I will still explain. If you are forgetting, we have a very friendly “we have the atom bomb and it is not for showcase” friend. That is Pakistan! They literally have only one answer to every question and crisis – “the bomb”. Pakistan suffers from Obsessive Nuclear Compulsive Disorder (O’N‘CD).

As per “a normal nuclear Pakistan” by Toby Dalton and Micael Krepon, 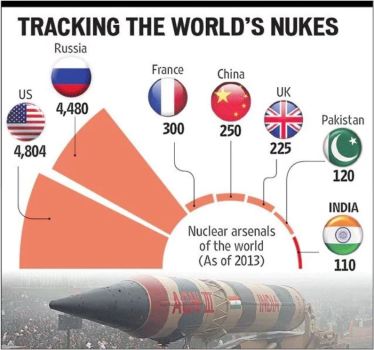 Pakistan produces around 20 nuclear warheads annually against India’s five. With this rate of production Pakistan would become the third country with most number of warheads after the US and Russia in one decade. They have already surpassed Indian in the tally of nuclear warheads. Image Source. Not only this, the country also has a larger stockpile of weapons grade fissile materiel. Even though, India could have more of both the weapons grade fissile material and nukes, it uses most of the fissile material as reactor grade and for naval propulsion.

What is their policy to decide how many nukes are enough? What is the number they are looking for?

India has a strict “no first strike” policy and Pakistan has refused to sign any such policy i.e. India can never use nukes before Pakistan however, Pakistan can and probably will. In the beginning Pakistan’s nuclear doctrine was “minimum credible deterrence” which actually made some sense as the country had a relatively weaker conventional military force as compared to India. However, in the course of last decade or so, they seemed to have dropped “minimum” from their doctrine and moved on to “full spectrum deterrence”. This effectively means that they do not want to give India any chance of a second strike as well i.e. when Pakistan attacks first, it should be able to target and destroy every part and not leave a single base from where India could launch any kind of attack in its defense.

Shaheen III, a nuclear capable missile with the range of 2750 kms in their arsenal is a shining example of this doctrine. The sole reason they used to justify it is that it would reach the Andaman and Nicobar Islands, which is a part of India, covering all of the India.

The truth is they carry their  Jihad under the nuclear umbrella. Lashker-e-Taiba (LeT), who is based in Pakistan orchestrated Mumbai 2008 attack. India could not react because they said “we have a bomb“.  Same in 2001, LeT and JeM(Jaish-e-Mohammed) both based in Pakistan attacked Indian Parliament and India could not do much because “they had the bomb”. Why didn’t India use Air-force in Kargil in 1999? In the beginning, Pakistan did not even accept the fact that they were involved in conflict. According to the them Kashimiri Militants/insurgents were involved. Later, when India proved the presence of Pakistani soldiers, they again had the bomb.

But now, with PM’s ASAT speech, they and every one else along with them know that India has a functional BMD. They are at the same place mentioned by Ashton in his hypothetical scenario for Soviets. They don’t know if they would be able to hit the targets at all. They don’t have BMD or ASAT.  They know if they fire first, officially wage a nuclear war with India and fail to hit the targets, India (in its self defense) would be able to hit them with their nukes right away. Their bluff has been called. Their nuclear blackmail is now a thing of past.

Going forward they will now have to choose one of the two options:

First, they would  have to let go of their “Bleed India by thousand cuts” doctrine i.e. stop Kashmir Insurgency and stop supporting terror groups that target India.

Or,  Second, they need to pump in money, a lot of money. Money enough to buy/produce several nuclear warheads for each target they aim for along with the latest and state of the art weapons/carriers. They have already been putting in a whooping $2.2 billion annually on nuclear weapons and that’s just nukes and not the complete defense spending. They have recently asked for their 22nd loan from IMF. 30.7 percent of Pakistan’s government expenditure is earmarked for debt servicing. Their Finance Minister  Mr. Asad Umar claimed that the country is near bankruptcy.  The US, who had been providing financial aid all those years have stopped/reduced the funding. Their economy is in complete ruins. Where is the money going to come from?

Their hunger for nuclear weapons began in 1971 after they had to face humiliation after surrendering 90,000 PoWs along with giving up East Pakistan. They realized that conventional forces won’t cut the deal. Zulfikar Ali Bhutto had said “we will eat grass but we will have nuclear bombs“. If they continue with the second option, they will not only have to live with what Mr. Bhutto had said but also face a civilian crisis similar to the one they faced in East Bangladesh. The money has to come from somewhere. You could guess the ways. I think civilians would be exploited which would lead to unrest or civil war. Maybe there would be more regions like Khyber Pakhtunkhwa or Balochistan aggressively looking for their freedom. What do you think?

I never wish ill for any body or country, but I also never imagine a mushroom cloud view from my window EVER.

This test was the last nail in the coffin. We just have to wait and watch!!!

Thanks for Reading!!! Also read: India’s journey from “HAL Marut” to “Tejas”

5 thoughts on “ASAT, ABM and the shifting Nuclear Paradigm”