As per the last available data, our population is increasing at a rate of 1.2% that is 1,58,90,056 (15 million) more people every year. This is more than the population of countries like Portugal (10 million), Belgium (11 million), Austria (8 Million) Switzerland (8 million) and many more. Very soon we would be a proud nation with the largest population in the world. Is it feasible to create 1.5 crore ( 15 million) meaningful jobs every year? 15 million for one year, approximately the same number or may be a little less for the previous year, and the year previous to that and so on and so on for the last 70 years. Do we have infinite resources?

Before jumping to the ways to curtail the population growth rate, it is imperative to identify the different factors that contribute to the population growth. The reason which almost everyone comes up is a high birth rate. Of course, this is one reason, but is it the biggest one? Are there other factors? What are they? Which of the factors should be considered first?

The finest example of birth rate not being the sole reason for population growth is the current list of National Register of Citizens in the state of Assam with a population of 31 million. There are approximately 4 million people who are not in the list, even if we assume some of them would be able to append their names in the list by the stipulated time, still there will be millions who are not Indians.  Bangladesh and India share a 4,156 km (2,582 mi)-long international border, the fifth-longest land border in the world, including 262 km (163 mi) in Assam, 856 km (532 mi) in Tripura, 180 km (110 mi) in Mizoram, 443 km (275 mi) in Meghalaya, and 2,217 km (1,378 mi) in West Bengal. If we simply look at the numbers, we can extrapolate the number of  people  with “doubtful” nationality status in the states mentioned above.  4 million out of 31 million turns out to be 12.9% of the people with doubtful nationality as per the current NRC. If we use the same factor on the state of West Bengal, which hosts a population of 90 million, the number of people with doubtful nationality comes out to be 11.6 or 11 million. Moreover, the population statistics available are from the 2011 census i.e. the numbers are 7 years old. Also to keep in mind is that this number is extremely conservative simply because the length of the porous border WB shares with the neighboring country is roughly 8.4 times more than what Assam shares and so logically, more number of people would have crossed the border. You could do the basic mathematics for all the other states sharing their borders in the similar fashion and come to a number.  Further, Bangladesh came into existence post ’71 which means not all the migrants are from Bangladesh. I think you can guess the nationality of the some of the older migrants.

I made following observations regarding population growth rate and fertility rate in India on the basis of the data available on the internet. Just enter birth rate India in google search and you will find the images pasted below (on the left, the dark blue line indicates the birth rate; the blue dot on the line indicates the year in consideration and is given in the red rectangle; the red rectangle on the extreme right gives the annual change in population growth rate) . 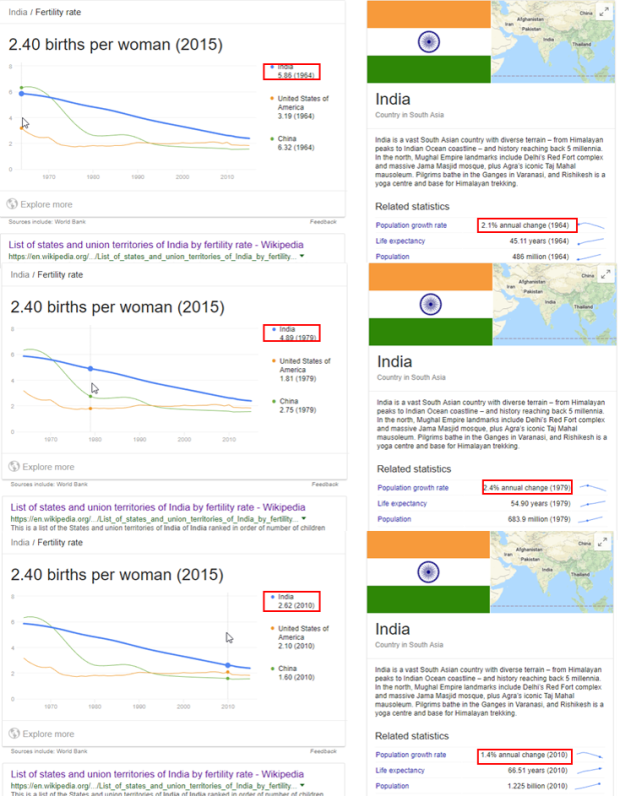 In addition to this, according to BBC news : “During the 1975 Emergency – when civil liberties were suspended Sanjay Gandhi, son of the former Prime Minister Indira Gandhi, began what was described by many as a “gruesome campaign” to sterilize poor men. There were reports of police cordoning off villages and virtually dragging the men to surgery An astonishing 6.2 million Indian men were sterilized in just a year, which was “15 times the number of people sterilized by the Nazis”, according to science journalist Mara Hvistendahl. Two thousand men died from botched operations.” Some sources also say between June 25, 1975 and March 1977, an estimated 11 million men and women were sterilized using such tactics. Another 1 million women were inserted with IUDs.

Even with two full-fledged wars (1965 and 1971) and millions forceful sterilization, the population growth rate increased till 1979. What happened between 1964 and 1979? Why did the population grow in-spite of decreasing birth rate? The entire future generations of millions of native Indians were wiped off in the name of population control and yet at the very same time, illegal migrants were overlooked and allowed to settle.  Was this population control measure (forceful sterilization) by Mr. Gandhi a cover-up for some demographic mess up? Was it a master plan for building a loyal vote bank at the cost of lives of native Indians as the forced sterilization was mostly targeted in UP, Punjab, Haryana, Himachal Pradesh and Rajasthan. Conceivably this is the reason why people panic as soon as they hear birth control from a government source. Adding to all this, illegal migrants have more kids simply because they are uneducated and poor. And you cannot debate if the educated people have more kids or the uneducated ones.

Straightforward question, what is the contribution of illegal immigration on the population growth in India? I don’t say that it is the sole reason or it is the most leading contributor, all I am saying is that it is definitely a contributor. And if we are earnestly seeking solutions to a problem we should know all the factor responsible for  the problem. Once all the factors are listed with their exact contribution towards the problem we can proceed further. On the basis of resources available, the time required, finances required so on and so forth we could prioritize them and start fixing them one by one.

NRC is an opportunity to resolve something that should not have occurred in the first place or should have been resolved three decades ago. And the states mentioned above are not the only states in India, once you enter any state, you can live in any of the 29 states and 7 union territories.  This makes me wonder if an activity like NRC is required in all 36 entities in India. And when I say NRC, by no means I imply that the people who are not citizens should be thrown out, there are more than enough humanitarian ways to tackle this. NRC is the only way to list people of different nationalities so that we can actually work on population explosion issue.

Right now, we are at the Square 1 of the population explosion problem. The only thing as of now we certainly know is that there is a problem and a major problem and if we don’t do anything about this there are going to be serious repercussions. Resources are limited. We don’t know where the problem is, what the problem is but are simply trying to fix the problem. How would you feel if you visit a doctor and he starts the treatment without even asking what the problem is?

Forceful sterilization is not the way to go towards this problem, infact it is the Congress’ way of doing things. Congress is incapable of doing anything good for the country simply because they are always lead by minds from one family who are interesting in power more than anything else, they create bigger and more complex problems for the future generations. If the immigrant influx was stopped right then, the NRC issue would not have happened at all. And having done things like these, they still have the audacity to say the ruling party does not execute and implement things after careful planning. I guess they would have a complete documentation of all the legal-illegal people in India along with other factors affecting the population growth before they started cutting open the native Indians.  They should share their findings with media or post them on the internet because it would be very helpful for the ruling government in speeding up the process.

Invasive measures like sterilization should be the last resort once everything has been tried and tested.

If you find some merit in this article, please stay connected for my next blog regarding my ideas of controlling population growth rate without a body snatching sterilization program.